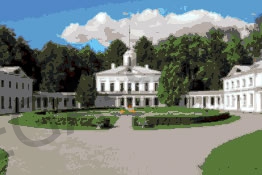 Within the frameworks of the Year of Culture in Russia and the Moscow region, 2014 has become a year when Andrey Vorobiev assigned the heads of all municipal administrations of the Moscow region to create the Album of the new face of the town. Such specific road map on development of the architectural image for the nearest years shall finally lead to creation of original image of every town located in the Moscow region.

The first transformation touched Kolomna, then the big works took place in Sergiev Posad, the next one was Klin. The uniformity of style is kept in Dzerzhinsk and Lobnya. Tatiana Vitusheva, Head of Gosadmtechnadzor of the Moscow region, informed about it in the news on the web site of the administration of the Moscow region.

Now the works on creation of the town image are conducted in Ruza, then come Odintsovo, Naro-Fomisk, Lyubertsy. The program is planed so that ‘the way of thinking of resident changes, and they do not litter, break and destroy’, says Tatiana Vitusheva.

At the same time, the Main regional directorate for supervision of administrative and technical image of the municipal settlements reported on the works done for 8 months of 2014: repaired – 1 157 facades of the buildings in the Moscow region, reconstructed – 452 fences, adjusted – 271 structures and 235 billboard stands.