WHO WILL BUILD THE KERCH BRIDGE? — MEGA-STROY 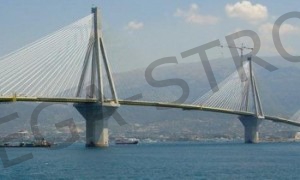 One of the most actual construction projects – construction of the bridge between the Crimea and the Taman peninsula – is actively discussed and designed. Under preliminary estimates, this construction will cost approximately 200 billion Rubles.

Today the Clients for this projects are Russian companies Avtodor and its subsidiary TPTK, JSC. The Ministry of transport of the Russian Federation has the available master plan stating that by autumn end 2014 all surveying works shall be over and a complete set of technical documentation shall be prepared. The design group has not defined yet whether Russia will be able to build a tunnel or a well-strengthened bridge on its own. The president assigned to develop the project of the joint passage with car and railway roads. History tells that in the end of the Great Patriotic War there was a bridge through the Kerch strait but it stood for three months only and had to be demolished after three of its supports fell.

Today it is informed that China plans to invest heavily in construction of the Kerch way connecting the Crimea with Kuban. The private company China international Fund LTD along with the state structure China Railway Construction are ready to take significant part in this construction.

According to the state design the bridge must be over by 2020.